The Damning Delerium of Doubt

I am not the most confident person you will ever meet.

Call me insecure, or perhaps a tad clueless, but confidence is something I've never had an adequate grip on since childhood.


"I'd go into a situation, be it work, school or any variety of ambitions I had, with guns blazing, ready to tackle the challenges before me; gung ho, do or die, take no prisoners."

To clarify, I grew up in a great home with great parents, neither of which ever allowed themselves to tear me down even when I was at my most disappointing. Now, because I wasn't exactly the most prolific of students (I coasted through most of my public school education) I inadvertently forced them to lower their standards (Freshman Year: We want a B average; Senior Year: Get a C average and graduate and we'll be happy). What I didn't consider then was that my work ethic- or lack thereof- in school would translate to almost everything that I did in other areas of my life. Sometimes I wondered why I couldn't/wouldn't do better in school, but deep down I knew it was because I was lazy and undisciplined. Teachers would frequently echo the same sentiment, often laced with frustration: Kyle is intelligent and has lots of potential-- he just doesn't apply himself. While I suppose I knew that the power to change all of that was within my hands, I guess hearing that same old tune sucked whatever confidence I should have had out of me. In a nutshell, I threw myself pity parties and often.

I'd have spurts of motivation, often running on the fumes of confidence scraped from the bottom of the barrel. I'd go into a situation, be it work, school or any variety of ambitions I had, with guns blazing, ready to tackle the challenges before me; gung ho, do or die, take no prisoners.

But in my initial enthusiasm I'd quickly run out of steam and bullets, and much like King Arthur in Monty Python and the Holy Grail I'd be soon yelling "Run away!" before I was even in the thick of whatever it was that I was looking to accomplish.


"...I didn't think outside the box much, probably owing to the fact that I didn't have a box to keep my thoughts in. It's possible that I lost the box-- more than likely I never had it."

As a result, people would look at me differently, sometimes with an excess of confusion. At times it looked like disdain, but doing a double take I realized it was more a sense of baffled bewilderment. Refer back to my remark about my initial enthusiasm: In my head, by going in guns blazing, I imagined that gusto being able to power me through days, weeks and even months without me even having to do much else except let that rocket blaze until it burned out. And burn out it did, but much sooner than I expected and not with the results I just assumed would come from conjuring up some chutzpah out of what felt like thin air. 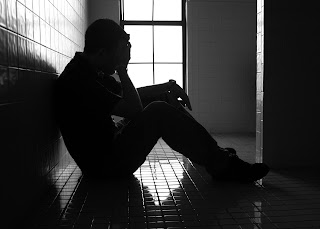 Naturally, people became frustrated with me, probably wondering where in the hell my follow through was. My methods were often analog with whatever I was doing, not really very innovative and often belaboring the process. Another way of putting it is that I didn't think outside the box much, probably owing to the fact that I didn't have a box to keep my thoughts in. It's possible that I lost the box-- more than likely I never had it. The times that I did perform above average would leave some in shock and others in more bewilderment than when they wondered why I didn't finish what I started, which pissed me off to no end (imagine doing something REALLY well and the majority reaction being: Wow-- didn't expect that from you...). Such reactions and attitudes didn't do much to bolster my confidence, and so I perceived that the problem lay in the minds and mannerisms of others: Becoming so easily frustrated with me, lack of patience, confusion, bewilderment, etc. I wondered if that was just how people felt about me in general since it seemed to be a theme in my life; I wondered if anyone actually believed I could do more or if it was all talk. Not being the most practical person in the world I didn't approach the real problem for a long time, and even now I'm still wrestling with it on a fairly regular basis.

The real problem? Me, of course.

More to the point, my attitude. Pity parties are only ever parties for one, no matter how many others you can get to join you. Because even if you have a whole entourage of fellow pity-ers en masse around you, odds are they'll get worn out and burnt out hanging around a Debbie or Dougie Downer all the time, even if they can relate. Negativity (thoughts, circumstances, environment, etc.), abundant though it may be in our lives, is just a septic river we have to wade through sometimes until we emerge on a more positive platform. How long we stay in that river however, is entirely dependant upon us. For if we wade too long, we may find ourselves becoming all to content to drift, and eventually sink there, as was the case for me for quite some time. 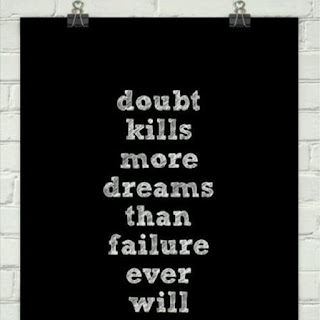 "...if God gave you a certain gifting, then trust that you can use it and well; cultivate it, grow it and don't allow it to collect dust."

Again, I still struggle with this, and probably unnecessarily so. Knowing what I am capable of and acting on that capability are two completely different things, but when made to work together can forge some pretty incredible results. From someone who tends to allow themselves to slip into a funk way too easily at times, things may not progress as soon or as quickly as you want them to-- doubts will creep in a linger if we allow them to, and allowing them to linger can kill your motivation slowly until hardly a shred of it remains. So please, take it from someone who's still learning-- don't let the delirium of doubt condemn your dreams to development hell (a fancy way of saying a project that never gets off the ground). Odds are whatever talent/gifting you have has been confirmed by people who notice how well you do what you do, otherwise you might never have realized you had that gifting to begin with. If it's been confirmed time and again, odds are that's what you are meant to do-- a God-given talent to bless the world with. So if God gave you a certain gifting, then trust that you can use it and well; cultivate it, grow it and don't allow it to collect dust. Shake off the doubts and keep plugging away, knowing that if you don't give up you can/will achieve more than you thought you ever possibly could.

Again, these aren't the words of an expert, but of one still learning to take his own advice.

Posted by Unknown at 2:56:00 PM
Email ThisBlogThis!Share to TwitterShare to FacebookShare to Pinterest